Missile attacks by US drones in Pakistan's tribal areas have more than trebled under the Obama administration, research by the BBC Urdu service shows. 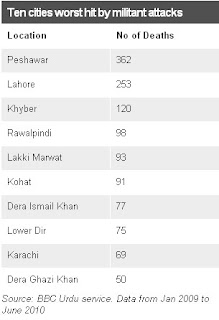 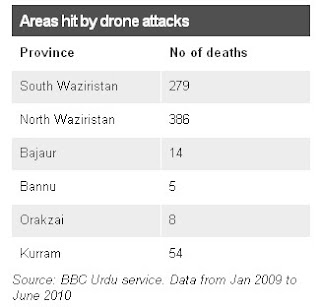 Compared with 25 drone strikes between January 2008 and January 2009, there were at least 87 such attacks between President Obama taking office on 20 January 2009 and the end of June 2010.

More than 700 people have been killed in such attacks under Mr Obama, compared with slightly fewer than 200 from under his predecessor, George W Bush.

The increased frequency of drone strikes follows a reported shift in US policy to extend its drone operations. It has moved from targeting al-Qaeda suspects to including Pakistani Taliban who are believed to be providing a haven for al-Qaeda leaders and operatives.

The bulk of these attacks have been in North Waziristan, with neighbouring South Waziristan the next main target.

While more than 700 people have died in these attacks, positive identification of the victims, either by Pakistani or US authorities, has been made in fewer than a dozen instances.
Posted by GEMABERSUARA at 6:42 PM