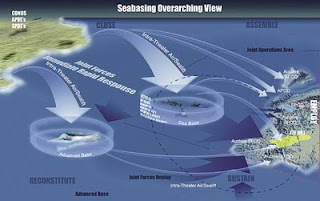 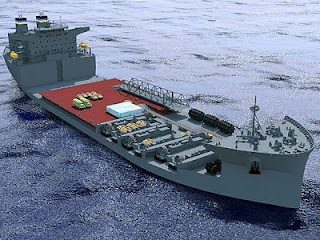 20 Agustus 2010
The MLP is intended to be a new class and type of auxiliary support ship, as part of the US Navy’s Maritime Prepositioning Force of the Future (MPF-F) program. They’re intended to serve as a transfer station or floating pier at sea, improving the U.S. military’s ability to deliver equipment and cargo from ship to shore when friendly bases are denied, or simply don’t exist.

It’s an interesting and unusual concept, one closely connected to the au courant concept of “seabasing”...

The MLP is supposed to be about bout 800 feet/ 250m long and built to commercial standards, displacing about 34,500 tonnes and able to travel at about 20 knots, with a range of around 9,000 nautical miles. The Navy intends to build a total of 3, with 1st delivery expected in 2015.

Requirements include the ability to land helicopters, the ability to embark and launch LCAC hovercraft, and the capability for ship-to-ship transfer of equipment from large-draft prepositioning ships to other vessels, including T-AKE supply ships.

The MLP has been delayed by shipbuilding and budget issues, but its biggest risk factor is the uncertainty and debate over the larger Maritime Prepositioned Forces-Future (MPF-F) concept. The MPF-F is supposed to be the first step into “Seabasing,” but the bottom line is that MPF-F has come out on the short end in future budget planning. It’s an open question whether the US Navy will be able to execute sea basing beyond conventional peacetime maritime engagement roles.