(Reuters) - President Barack Obama said on Tuesday the objective of a U.S. and allied campaign is to apply steady pressure on Libyan leader Muammar Ga 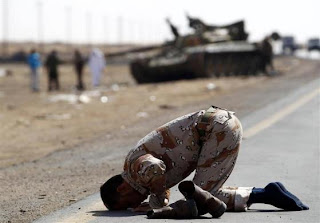 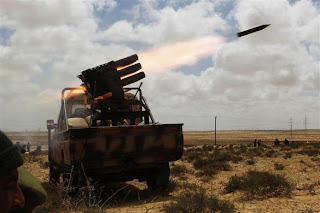 Obama, accused by many U.S. lawmakers of launching military operations in Libya without a clear end in sight, told NBC News he believed a Western air assault and international sanctions have left Gaddafi "greatly weakened" and unable to control most of his country.

Obama gave interviews to NBC, ABC and CBS to explain why he ordered the use of force in Libya a day after delivering a major speech on the topic. He did not rule out providing military hardware to Libyan rebels.

Some lawmakers have seized on Obama's policy -- using airstrikes and planes to protect Libyan civilians but not to try to oust Gaddafi -- as evidence of a flawed strategy.

Obama made the case that his strategy of military and sanctions pressure will pay off with Gaddafi's ouster sooner or later.

"And so our expectation is that as we continue to apply steady pressure, not only militarily but also through these other means, that Gaddafi will ultimately step down," he said.

He gave a nudge to Gaddafi's inner circle in an ABC interview. "I think what we're seeing is that the circle around Gaddafi understands that the noose is tightening, that their days are probably numbered, and they are going to have to think through what their next steps are," Obama said.

And he said he had already agreed to provide nonlethal aid such as communications equipment, medical supplies and potentially transportation aid to the Libyan opposition.

"We are going to be looking at all options to provide support to the Libyan people so that we can transition toward a more peaceful and more stable Libya," Obama said
With unrest convulsing Syria, Yemen and Bahrain, Obama said his Libyan policy should not necessarily be viewed as an "Obama Doctrine," saying each country in the region is different.

While force was used in Libya, he said, this "does not mean that somehow we are going to go around trying to use military force to impose or apply certain forms of government."

(Additional reporting by Alister Bull in Washington; Writing by Steve Holland; Editing by Todd Eastham)
Posted by GEMABERSUARA at 7:48 PM