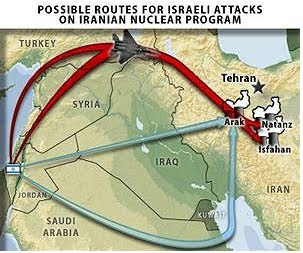 US Defense Secretary Leon Panetta believes there is a "strong possibility" that Israel will strike Iran's nuclear installations this spring, the Washington Post said Thursday in an editorial.

When asked about the opinion piece by reporters travelling with him to a NATO meeting in Brussels, Panetta brushed it aside.

"I'm not going to comment on that. David Ignatius can write what he will but with regards with what I think and what I view, I consider that to be an area that belongs to me and nobody else," he said.

"Israel indicated they're considering this (a strike), we've indicated our concerns," he added.

The Post columnist said Panetta "believes there is a strong likelihood that Israel will strike Iran in April, May or June before Iran enters what Israelis described as a 'zone of immunity' to commence building a nuclear bomb."

President Barack Obama and Panetta are "said to have cautioned the Israelis that the United States opposes an attack, believing that it would derail an increasingly successful international economic sanctions program and other non-military efforts to stop Iran from crossing the threshold," he said.

"But the White House hasnt yet decided precisely how the United States would respond if the Israelis do attack."

Panetta said Sunday in an interview with CBS that Iran needed "about a year" to produce enough enriched uranium for a nuclear weapon, and one or two more years to "put it on a deliverable vehicle."

Iran insists its nuclear project is peaceful and has threatened retaliation over the fresh sanctions, including possibly disrupting shipping through the strategic Strait of Hormuz.

Israeli media reported in October last year that the option of pre-emptive air strikes on Iran was opposed by the country's intelligence services but favored by Prime Minister Benjamin Netanyahu and Defence Minister Ehud Barak.

Israeli television said Mossad chief Tamir Pardo raised the possibility of a unilateral strike on Iran during a visit last week to Washington.