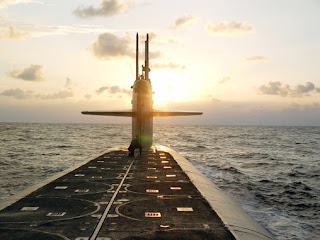 
The U.S. Navy is investing in research that could make its submarines even stealthier, using cloaking technology that seems to come straight out of a Tom Clancy thriller or Star Trek script. Developed by New York-based Weidlinger Associates with U.S. Navy Small Business Innovation Research (SBIR) funding, the technology involves the carving up and altering of aluminum to give it “elastic properties” — a form of what the company calls “metal water,” according to Jeffrey Cipolla, a Weidlinger senior associate. The underwater acoustic-evading technology for submarines and unmanned undersea vehicles, now in SBIR Phase II development, creates a coating that features broadband, passive waveguides, which redirect acoustic energy around an object, “rendering it nearly undetectable” to active sonar, the company says. The coatings also “decouple” structural vibrations from the water, the company says, reducing passive sonar signature. The cloak “suppresses all scatters and reflected waves,” Cipolla said June 4 during a presentation at the Navy’s annual Opportunity Forum in Arlington, Va. The company carves up aluminum along hexagonal lines and creates a cylindrical cloak from the hexagonal cell structure, he says. The resulting cloak is a heavy garment for the sub, and the Navy will have to accept that idea, Cipolla says, if it wants to pursue this technology. “Any cloak technology worth its salt is going to be heavy,” he says, adding that there will be no “spray-on coating.” He says, “It’s going to be a structure [that has to be attached to the sub].” The software the company has developed for the technology has reached a technology readiness level (TRL) of 5, he says. The material maturity is about a TRL 4 and the overall concept is at a TRL 3, he notes.