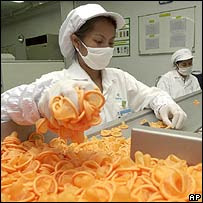 A survey of more than 1,000 men in India has concluded that condoms made according to international sizes are too large for a majority of Indian men.

The study found that more than half of the men measured had penises that were shorter than international standards for condoms.

It has led to a call for condoms of mixed sizes to be made more widely available in India.

The two-year study was carried out by the Indian Council of Medical Research.

Over 1,200 volunteers from the length and breadth of the country had their penises measured precisely, down to the last millimetre.

The scientists even checked their sample was representative of India as a whole in terms of class, religion and urban and rural dwellers.

The conclusion of all this scientific endeavour is that about 60% of Indian men have penises which are between three and five centimetres shorter than international standards used in condom manufacture.
Posted by GEMABERSUARA at 8:02 AM