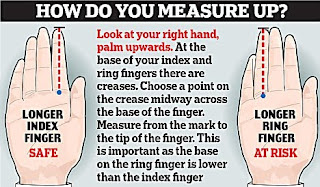 Doctors found that the risk increases if the ring finger on the right hand is significantly longer than the index finger next to the thumb.

But men whose ring fingers are only slightly longer, or are about the same length, are much less likely to get the disease.

The findings open up the possibility of screening men with longer fingers at an early age for signs of cancer.

In the study, blood tests showed that men with longer ring fingers on their right hand had higher levels of prostate specific antigen (PSA).

This chemical is sometimes found in high levels in blood when cancer is present. The right hand was studied because the difference between the length of its ring finger and index finger is often greater than on the left, as it is more sensitive to hormonal changes in the womb.

The results are the latest in a long line of studies linking finger length to men's health, most of which highlight the benefits of a long ring finger.

These include reduced risk of heart disease, a better chance of exam success and increased fertility.

Last year a team of experts from the Medical Research Council's Epidemiology Resource Unit at Southampton University even found that young men with longer ring fingers made better sprinters.

The key to these findings is thought to be the level of exposure to the hormone testosterone in the womb.

Higher levels also make it more likely that a boy will have a slightly longer ring finger on their right hand. Testosterone is also known to stimulate prostate tumour development.

In the latest study, doctors at Gachon University Gil Hospital, in Incheon, South Korea, studied 366 men over the age of 40 who went to a hospital clinic complaining of problems urinating, a symptom which could be a warning sign of cancer.

They had their fingers measured from the crease where the finger joins the hand to the tip.

Blood tests showed that men with much longer ring fingers had almost double the levels of PSA found in the blood of those with shorter fingers.

Three times as many of these men went on to be diagnosed with prostate cancer. Researchers writing in the British Journal of Urology online said the 'digit ratio' - the difference in length between ring and index finger - could be used to predict which men could get cancer.

'Digit ratio is a predictor of high PSA levels and the presence of prostate cancer,' they said.

'We believe our results present sufficient evidence that a relationship exists between the two.'

But Ed Yong, Cancer Research UK's head of health information, said: 'Finger length ratios have been linked to all sorts of things before with little evidence that measuring these ratios will ever actually be useful.

'For example, this very small study finds an association between finger length ratio and prostate cancer risk, but tells us nothing about whether the ratio can be used to reliably predict that risk.'