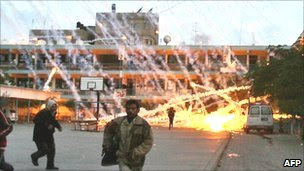 The Israeli military will restrict its use of artillery shells containing white phosphorus, it has told the UN.

The controversial weapons cause deadly burns and rights groups say they are banned from use in civilian areas.

The Israel Defense Forces used weapons containing white phosphorus during a 22-day assault on Gaza which began in December 2008.

In its report to the UN, the IDF said steps would be taken in future to avoid civilian casualties.

"The IDF chief of general staff ordered the establishment of a clear doctrine and orders on the issue of various munitions that contain white phosphorus," the report said.

"These instructions are currently being implemented."
Burning

Part of a UN compound burned down after it was hit by chunks of the burning chemical which ignites on contact with air.

The weapon has been used on battlefields to create cover for advancing troops and to flush infantry out of their positions, but human rights groups say international law bans its use in civilian areas.

Burning phosphorus sticks to skin and will continue to burn flesh until the supply of oxygen is cut off.

Palestinians and rights groups say more than 1,400 Gazans died in the conflict, but Israel puts the figure at 1,166. Thirteen Israelis, including three civilians, were killed.
War crimes

The Israeli military say that the attack was launched to prevent rockets being fired into southern Israel from Gaza.

The UN has sharply criticised both sides in the conflict.

A report by the former prosecutor at the International Criminal Court, Richard Goldstone, accused both the IDF and Hamas of war crimes.

The Goldstone report has been condemned by the Israeli government as biased.

Israel's latest report to the UN, posted on the website of the Ministry of Foreign Affairs, also says it has launched 150 investigations into the conduct of its soldiers during the offensive.