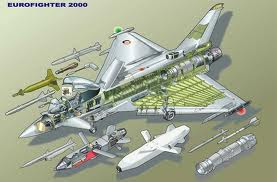 The EFA was focused on air superiority, but could perform ground attack as a secondary mission. It was to have high performance, be highly maneuverable, and have docile handling characteristics. It was also to have a low radar cross section (RCS) and be capable of operating from short forward airstrips. A formal development contract was awarded to the "EuroFighter" consortium on 23 November 1988, specifying delivery of eight prototypes.

The principal manufacturers in the consortium were, in order of workshare: BAE Systems of the UK (33%); MBB (later DASA) of Germany (33%), Aeritalia (later Alenia) of Italy (21%); and CASA of Spain (13%). DASA and CASA are now part of the EADS aerospace group.

The "EJ.200" engine for the new fighter was to be developed by the parallel "EuroJet" group, which includes Rolls-Royce, MTU, Fiat Avio, and SENER (now ITP) of Spain. The EJ.200 is an evolution of the RB.199, derived from the Rolls-Royce "XG40" demonstrator engine built in the early days of the EuroFighter program. The EJ.200 was to provide better performance and 30% fewer parts than the RB.199.

The insistence of the British and Spanish on a multirole capability was important to the machine's survival. The fall of the Soviet Union greatly changed the nature of the challenge faced by European nations from a hostile Communist monolith to the East, to unpredictable brushfire conflicts that could spring up almost anywhere. A multirole EuroFighter fit the new challenges well.

The formal decision to go ahead with production was made in 1997, with production contracts awarded in 1998. In September 1998, the EuroFighter organization announced the aircraft's name of "Typhoon". This name was assigned for export aircraft, and the organization stressed that member nations would be free to name it what they liked. However, Typhoon was a good choice for a name, since it was assigned to historically important British and German aircraft, and the word itself is derived from Japanese and so reflects no linguistic bias among the EuroFighter group member nations.

Since the aircraft was still not in production, much less operational service, by the year 2000, the various factions involved in the effort gradually began to refer to the aircraft as simply the "EuroFighter" and not the "EuroFighter EF2000". Despite all the problems and delays -- which were not unique to the EuroFighter among the fourth-generation fighter efforts, and to an extent were inevitable in a multinational collaboration -- the result appears to be no disappointment.

The airframe is built of about 50% composite materials by weight and about 70% by surface area, with substantial use of titanium and lithium-aluminum alloys elsewhere. Metals only make up 15% of the materials used in the Eurofighter. Although comparable in dimensions to the Tornado, the EuroFighter has an empty weight only about 70% as great, while being more capable in almost all regards. The advanced construction techniques also reduces the parts count of the airframe, with the EuroFighter having about 16,000 structural elements to 36,000 for the Tornado.

While the EuroFighter has a greater RCS than the US F-22 or F-35, radar-absorbent material is used in the inlets and around the cockpit, and the composite assemblies were designed with an eye towards reducing RCS.

In March 2006, the Eurofighter finally entered service in the RAF, with the first operational Typhoon squadron formed on March 31st.
http://air-attack.com/page/43/Eurofighter-Typhoon.html
Posted by GEMABERSUARA at 9:42 AM